Planet Plumbing & Drain has a highly qualified team to repair your sewer line if necessary. It may only need a proper cleaning. With our video camera inspection system, we can locate exactly where and what the problem is in your sewer line, and provide you with the information. After informing the customer of the exact nature of the problem, we will perform and necessary repairs, or just a cleaning, depending on what will solve the problem.

Clay sewer pipe is still used today, however, it is heavy and tricky to cut. Many think clay sewer pipes are outdated, but they are still an effective type of sewer pipe. A primary benefit of clay pipes, is that it is inert making it very resistant to chemical degradation. A negative of clay pipes is that is has a porous surface, making it susceptible to tree roots, and the roots may eventually cause the pipe to crack or break.

In older homes built before the 1950s, clay pipe was used often in addition to cast-iron pipes. Because of their age, clay sewer pipes often need to be replaced.

Clay pipes can continued to be used as long as they are still moving sewage waste with no leaks. In most sewer line replacements today, plumbers use PVC or ABS plastic pipe over clay and cast-iron. Plastic pipe is easier to work with, but clay and iron still have their advantages, such as longer lifespans.

Fill out my online form.

Planet Plumbing & Drain is a Colorado based company and has been serving Boulder, Broomfield, Weld, Denver, Adams, Arapahoe, Douglas, and Jefferson counties since 1997! We are open 7 days a week!

Every one of our plumbing technicians is experienced and trained in complete sewer repair services. No overtime fees and free estimates over the phone usually. There is no charge for on-site estimates when needed.

See what our customers say on Google, Facebook and Yelp.

Always Get at Least Three Estimates…You’ll Be Glad You Did! 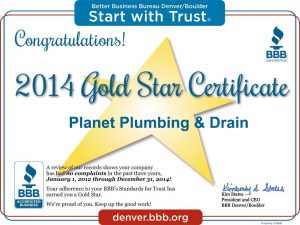